The Journey Home: Autobiography of an American Swami

by His Holiness Radhanath Swami

Every spiritual seeker who has found their personal path has a story. But there are not many stories as powerful and moving as Radhanath Swami’s The Journey Home.

In the Summer of 1970, at 19, Richard Slavin (later Radhanath Swami) travels to Europe with a few high school buddies. They plan to spend the summer overseas, and return to college in the fall. All their money is stolen the first night of their trip, and from that moment on, nothing ordinary happens.

Soon, Richard and his best friend Gary find themselves traveling together—on s spiritual quest. While in Greece, Richard decides he must go to India, while Gary heads to Isreal. Alone, Richard travels through some of the most dangerous areas of the world: Turkey, Iran, Afghanistan, and Pakistan. After near death in Afghanistan and Iran, he enters India (not without more difficulty at the border) and into the heart of his spiritual quest.

A sincere seeker, Richard manages to meet and spend time with many well-known gurus and spiritualists such as Mother Teresa, The Dalai Lama, Muktananda, Neem Karoli Baba, Ananda Mayi Ma, Swami Shivananda, and others. It would be impossible to replicate his adventures today, but in the early 70s very few western young people were traveling India as sincere seekers, so contact with the acharyas of those ashrams was not so difficult, making his quest all the more richer and interesting to the reader.

To me, the most beautiful and moving stories come from his time spent with unknown but extremely advanced souls who serve the Lord with humility and sincerity. Indeed, that is one of the beauties of spiritual India—that even to this day such saintly individuals exist in humble anonymity.

After wandering India, searching for that one person, that one guru who could end his search, Richard surrenders his heart to A.C. Bhaktivedanta Swami, the personality he knows he can spend his life serving. Years later, Radhanath Swami is now known around the world as a spiritual leader of great humility whose projects feed and school thousands of poor children throughout India, and who continues to inspire many more thousands on their paths to self-realization.

In the early 70s my friends and I were all reading The Autobiography of a Yogi by Paramahamsa Yogananda. It sparked our desire for finding a spiritual teacher. The Journey Home, being the story of a young western man, resonates especially well with modern seekers young and old from all nationalities, gently challenging all to begin their own spiritual quest.

This book is an absolute page-turner of rare beauty and candor. This reviewer read it in a day and a half, ignoring most of her other responsibilities to travel with Radhanath Swami’s gentle heart through all it was to experience.

As a side note, Amit Acara das and I lived in a rural, spiritual ashram community in the mid-70s where Radhanatha das (at the time not yet a sannyasa “swami”) also lived. As quiet and humble as he was,  even then we saw in our godbrother a special spiritual strength. However, I was unaware of most of his wonderful story—learning it only upon reading this autobiography.

When you finish this wonderful book, remember your own spiritual journey . . . or  be inspired to begin one. 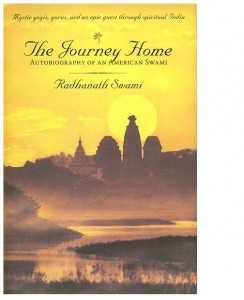 The Journey Home: Autobiography of an American Swami